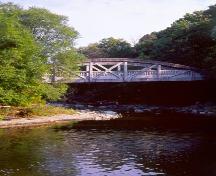 This bridge, built in 1909, is the second example of the concrete truss bridge or the tied arch to be built in North America and the first in Canada. The bridge can support a dead load of 200 tonnes and a live load of 10 tonnes. The bridge is sixteen feet wide with a concrete mix which was one of cement to three of aggregate consisting of sand and crushed stone.

Key character-defining elements that embody the heritage value of the bridge as an early example of reinforced concrete truss or tied arch bridge construction include its:
– massive arched compression chords, slim vertical tension members and system of counter braces
– truss joints specially designed so that members will fail in the body rather than at the joint

Key character-defining elements that embody the contextual heritage value of the bridge as an enduring remnant of the historic Middle Road and community landmark include the bridge’s:
– continued cultural and economic use as a transportation link between the former Counties of Peel and York
– location on the stone abutments of a former crossing of the Etobicoke Creek