LOCATION: In Edmonton, Alberta and crossing the North Saskatchewan River, the Low Level Bridge of the EY&amp;PR now carries northbound traffic into the downtown. South of this bridge and its twin (built in 1948), the abandoned EY&amp;PR grade has become a pedestrian and bicycle trail for 3.5 miles (5.6 km), through Mill Creek Ravine Park, using four of the original timber trestles and ending near 68th. Avenue and 93rd. Street. The original grade continued another mile (1.6km) to its connection with the Calgary and Edmonton Railway (C&ER) at 66th. Avenue and 102nd. Street.

BACKGROUND: The prime motivation for building the Low Level Bridge, at the turn of the century, was the need to provide a rail connection between two political and economic rivals, Strathcona, south of the North Saskatchewan River and Edmonton, north of it. The Canadian Pacific Railway (CPR) had agreed to operate the C&amp;ER, built by William Mackenzie and three partners and completed in July 1891, which had laid tracks to Strathcona but did not intend to cross the river because of the prohibitive cost of building a bridge. The Low Level Bridge, designed and built in 1900, by the Federal Government, led to the merger of the two communities. Designed for rail traffic, it carried only pedestrians and horses and wagons for its first two years. Mackenzie and Mann, expanding their Canadian Northern Railway Company (CNoR) into a transcontinental railway, leased the EY&amp;PR in 1901. Using the first leg (closed in 1974) of the EY&PR, the first train crossed the bridge on October 20th. 1902, thus connecting the CPR in Strathcona with Edmonton. The connection from the bridge to the CNoR (close to the present site of Molson’s Brewery) was made in 1905 by the second, 3.5 mile (5.1 km) leg built (closed in 1954). The third, 20 mile (32km) leg west to Stony Plain, on the route to the Yellowhead Pass, was built in 1907. (In 1899, at the time of the name change, the EY&amp;PR had been given authority for lines through this pass to a port in British Columbia and to the Yukon river, and in 1908, an extension to Vancouver was granted.) The EY&PR was amalgamated with the CNoR on April 23rd., 1909, under its name, enabling it to complete the route, through the mountains, to Vancouver and to provide an alternative to CPR’s transcontinental service. As a result of the First World War, in 1912, the CNoR became part of the Canadian National Railway. 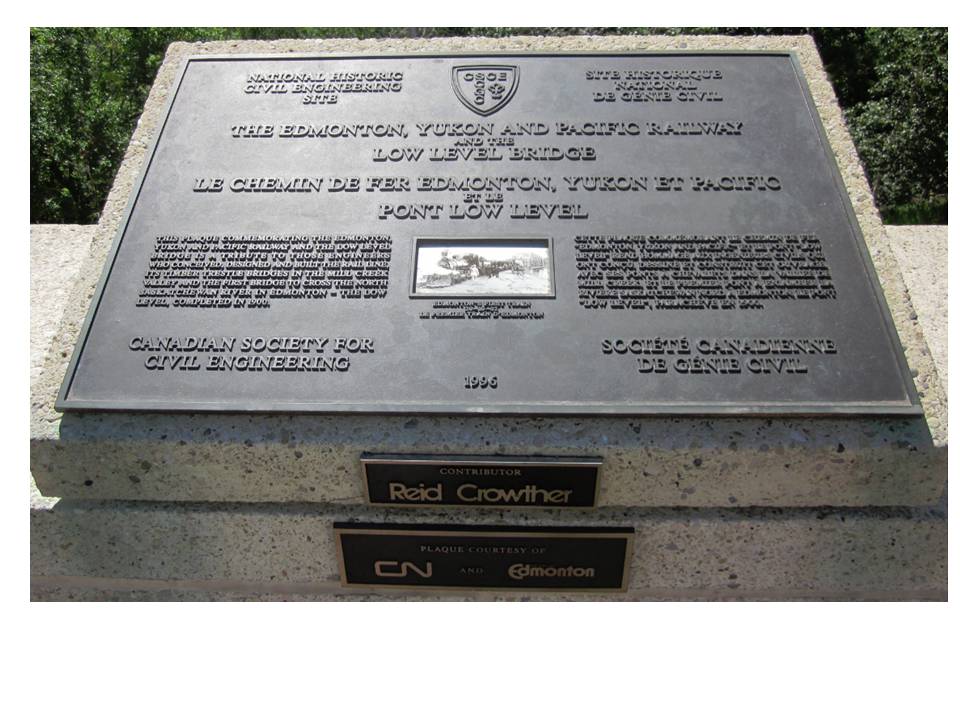